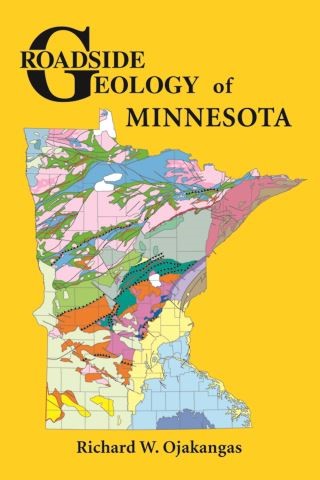 You may have heard that Minnesota’s ten thousand lakes are the hoofprints of Paul Bunyan’s big blue ox, Babe. “Don’t you believe it!” writes author Dick Ojakangas. Though the lakes, which formed at the end of the most recent ice age, may be Minnesota’s most famous features, the glaciated countryside disguises a much longer history of volcanoes and plate collisions—not surprising when you learn that Minnesota was at the active edge of the fledgling North American continent for several billion years.
Roadside Geology of Minnesota steers you over glacial moraines and till plains to some of the state’s unparalleled geologic features, such as the Morton Gneiss, once thought to be the oldest rock on Earth; the St. Peter Sandstone, one of the purest sandstones in the world; the banded iron-formation, the source of iron for the Great Lakes steel industry; and the ancient shorelines of Glacial Lake Agassiz, one of the largest glacial lakes ever to have existed in North America. The book’s introduction presents an overview of Minnesota’s geologic history, and forty-two road guides discuss the landforms and rocks visible from a car window and at nearby waysides and parks, including Pipestone National Monument, Grand Portage National Monument, and Voyageurs National Park.